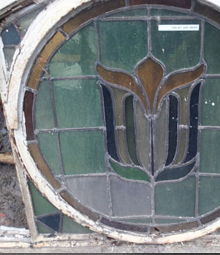 
In the 18th Century fanlights were made from 'crown' glass which was expertly spun out into a large disc before being cut to size.  A very skilled, and expensive, process which meant that fanlights produced at this time were found in large, stately homes, to increase the amount of natural light entering a hallway.  Later in the 19th Century the process of blowing larger, sausage shaped tubes of glass which were then cut and opening into a sheet allowed larger panes of glass to be made.  Though glazing bars were still required at points, more pattern, colour and design could be incorporated into the fanlight.  The Georgian period was the height of popularity for fanlights, most buildings built at this time integrated a fanlight above the main entrance door and it is from this period, and later into the early 20th Century, that most reclaimed fanlights were made.